This passage is filled with emptiness, loss, and hopelessness.  Naomi and her family left Bethlehem and moved to Moab to escape a famine; however, suffering and hardship followed them there, as Naomi's husband and both her sons died in Moab.  Both Naomi and her daughter-in-law Ruth were left as widows, which meant they were helpless and powerless in the culture of the day.  No wonder Naomi wanted to change her name to Mara, which means "bitter" in ancient Hebrew.

Although this story begins with emptiness, it does not end there.  Naomi and Ruth returned to Bethlehem, where God in his grace provided for them through Boaz, a kinsman-redeemer who married Ruth and thereby restored Naomi's family.

The story of Ruth is a reflection of the Gospel.  Both the creation and all humanity are empty, lost, and without hope due to the curse of sin and death. However, God in his grace provides a Redeemer, Jesus the Messiah, to restore us and creation. 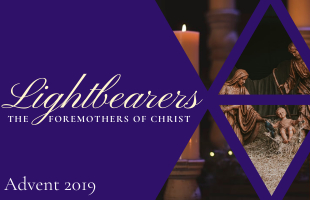 More in Lightbearers: the foremothers of Christ (Advent 2019)

The Family of Jesus

The Song of Mary