There were two main problems the Christians in Colossae had to deal with: (a) how to give their allegiance to Jesus Christ in a society where giving allegiance to anyone other than Caesar was considered treason, and (b) how to live as disciples of Jesus without falling into the trap of legalism, i.e. thinking that following certain rules (the Law of Moses in particular) would earn them their salvation.  In short, they were under pressure to conform to Roman culture and to Jewish culture at the same time.

Paul's teaching to the Colossians was a challenge to both of these cultures.  He pointed out to them that the death and resurrection of Jesus Christ gave them a new identity as children of God--they belonged to Jesus, not to Caesar. This new identity had implications for them in their everyday lives; their lives were to reflect their relationship with Jesus.

Paul's teaching is for us, as well as for the ancient Colossians.  We should not live as if we belong to the powers of this world.  Instead, we should live as children of God, and we should eliminate--"put to death", as Paul wrote--anything in our lives that are contrary to the kingdom of God. 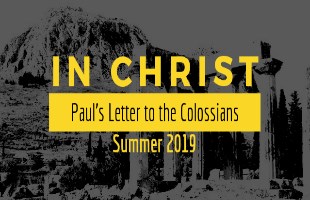