Due to the ongoing COVID-19 pandemic, the church building and church office are closed during the week. Learn what to expect as we resume Sunday services while ensuring physical distancing. Services continue to be available by live stream. Pastors and staff are working from home and can be reached by phone, text, or email.

Fifty years ago this past December, the crew of Apollo 8 took a photograph of the Earth, hanging in space over the Moon's horizon.  It was one of the most striking photos ever taken in outer space.  When commenting of this moment, the astronaut who took that photgraph said, "It made me think: 'you know, we really live on a beautiful little planet'".

God made this beautiful little planet, and when he looked at his creation, he saw that it was very good.  He gave humanity a blessing and a command--not to exploit and use up the Earth (as all too many people have misinterpreted this command), but to live on the Earth, to care for it, to build it up.  He calls us to love the Earth as much as he himself does.

God hasn't given up on his creation, and he never will.  He is still calling us to love the Earth as much as he does.  We shouldn't ignore or dismiss the dire state that our planet's environment is in, and we shouldn't fall into despair over it, either.  Instead, we should do what we can, however small it may be, to improve the environment around us. 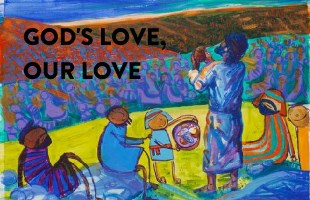