NOTE: Due to technical difficulties, the first portion of the sermon was not recorded.

Belonging and identity are key building blocks of our faith.  God created us to be in community, to be in relationship with himself and with other people.  The Lord's Supper is not only how God nourishes our souls individually--it is also how God unites us as a community of believers.  The term "the body of Christ" refers to both the Communion bread and to the people who partake of it.

This is why the way the church in Corinth was practicing the Lord's Supper was so wrong and so harmful, and why some of the members had been punished harshly by God.  The Corinthians may have been paying lip service to the ideas that they were a community formed by God's grace, and that all people are equal before God.  However, their actions proved that the wealthier members considered their poorer fellow members to be second-class Christians.  Of all the divisions that beset that church (and there were many), this division was by far the worst.

Paul called the members of the Corinthian church to examine themselves, to repent of these sins against their brothers and sisters in Christ, and to come to the table of the Lord as one community.  This call extends to us, as well. 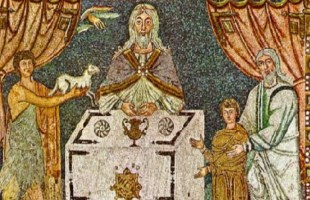