The first parable in Ezekiel 17 is an odd one, and a dark one.  The first eagle symbolizes Nebuchadnezzar, king of Babylon--a foreign power that the Lord used to punish the Israelites for their unfaithfulness to him.  The cedar tree repesents Judah; the top branch that the first eagle broke off represents the last real king of Judah (Jehoiachin) and his noblemen, who the Babylonians took into captivity.  The vine also repesents Judah, but as a weak vassal state, with Zedekiah set up by Nebuchadnezzar as a puppet king.  The second eagle repesents Egypt, and the root that the vine extends to the second eagle represents the duplicitous treaty that Zedekiah made with Egypt in an effort to get out from underneath Babylonian domination.  The parable ends with a grim prophecy that Zedekiah's underhanded schemes will fail, and that Babylon would return to crush Judah.

This parable has a warning for us, as well as for Zedekiah.  All our schemes to live our lives on our own terms, without regard to God or his laws, are doomed to failure.  All the things of this world in which we might put our trust will not protect us from the consequences of our sinfulness, just as Egypt did not protect Zedekiah from the wrath of Nebuchadnezzar.

The bleak image that this parable presents is not the last word, though.  There is a second parable at the end of this passage; God himself will plant a tender cedar shoot on a high mountain, and it will grow into a mighty tree that will bear fruit for all the world.  This shoot, and the tree that grows from it, represents a third king--not a brutal tyrant like Nebuchadnezzar, not a conniving weakling like Zedekiah, but Jesus Christ, the king who came not to rule but to serve, and to give his life as a ransom for many. 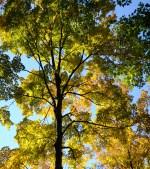